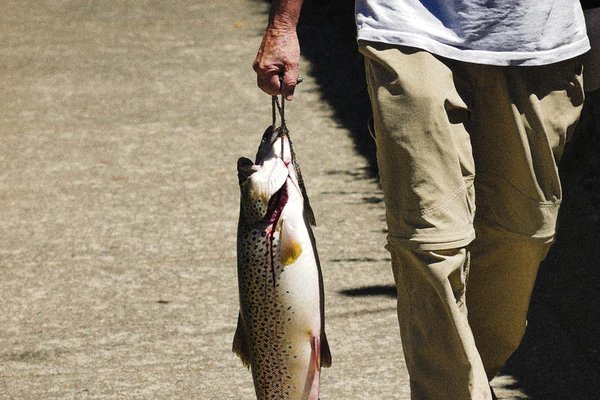 Are You a Keeper?

I love to fish. Sometimes I fish with some semi-pros who catch a big bass, then they hold it up, look at it, admire it, and then return it to the water. They then proudly say to me, “That one was almost a keeper.” Well, I personally like to eat fish. So when, or if, I catch a big one, it is a keeper. When it is a keeper, it means that it is not thrown away or returned to the water. The Lord fished and caught twelveand taught them to also be fishers of men (Matt. 4:19). He later said, “While I was with them in the world, I kept them in thy name: those (eleven) that thou gavest me I have kept, and none of them is lost, (but one) but the son of perdition; that the scripture might be fulfilled” (John 17:12). Eleven were keepers but one (Judas – unsaved) was nota keeper.

I then thought how the Lord fished for me. He used the right lure when He cast Carlene before me. Our eyes met and I was hooked and pulled into church where I heard the Gospel. He caught me hook, line and sinker. To my surprise, He did not throw me away. Why? What the Lord catches He keeps. He never casts away – All are keepers. “All that the Father giveth me shall come to me; and him that cometh to me I will in no wise cast out (John 6:37). In grace and love, He held me up and said, “This one is a keeper.” Thank God, I was a keeper. As “Popeye” I can say, “I yam what I yam by the grace of God.” As Paul, I can say, “But by the grace of GodI am what I am” (1 Cor. 15:10). I heard a preacher say that grace was the story of his life. I held my hand up and responded, “No! Grace is not the story of your life.

It is the story of my life.” It was also the story of John Newton another keeper. It amazed me how his famous song “Amazing Grace” flowed from his heart to his pen. He sat down and thought about his past then said, “Grace that’s what it was, it was amazing. Yes! That’s what it was, “Amazing Grace” (he wrote down the title). He said I like the sound of that. Then he wrote, “Amazing grace, how sweet the sound.” Then he thought and wrote, “That saved a wretch like me. I once was lost, but now I’m found. I was blind but now I see.” Amazing grace also made John Newton a keeper.

I also thought about my many “keepers.” Over 60 years ago I caught Carlene. “Whoso findeth a wife findeth a good thing and obtaineth favour of the LORD” (Prov.18:22). I caught her and she is a keeper. We also caught two fine children, one weighed 5lbs 12oz and the other 7lbs 15oz. Both are keepers. Later we caught two grandchildren and both are keepers. Through the years I have caught many friends who are keepers.

There was also a day I caught the largest bass ever caught at the Bill Rice Ranch lake. Dr. Bill Rice had it mounted and gave it to me. It is a keeper. But most of all, I am thankful for the day the Lord cast, pulled me in, caught me, held me up, showed me to the angels (Luke 15:10), and said, “This one is a keeper.” Selah! Think about it, “The LORD is thy keeper” (Psalms 121:5). Is the Lord your keeper? Are you a keeper?