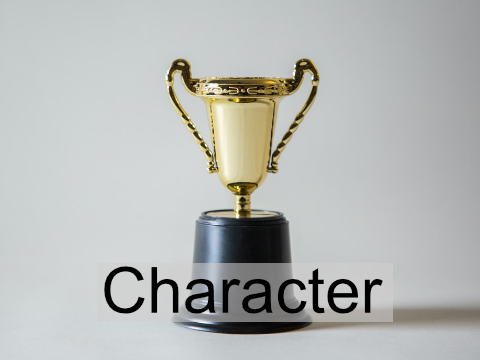 We are now living at a time when it seems that good Godly moral character does not matter. Statements are being made that it does not matter what a person does in his private life just so he performs his duties in public life. It is important for Christians to have a good reputation. Character could easily mean “a person with a good reputation who can be trusted.” Good Godly character means that a person is as good as their word and can be trusted.

What is Character? The dictionary defines character as

1. the aggregate of features and traits that form the individual nature of a person or thing
2. a trait or characteristic
3. moral quality or integrity
4. reputation
5. moral excellence
6. to show certain fine qualities
7. good qualities
8. reputation of a person
9. It is all of the qualities that make an individual.

Character is what you are when no one is looking. It is the real you. A person can either have good or bad
character.

Good character has a strong desire to do right. For Christians, good character follows God. It obeys the Bible. It does right even when it is hard to do right. Bad character does what is natural or easy. It does not have a set of rules to control life. The Bible gives several examples of people whose character changed. Peter was a crude rough fisherman. In Matthew 26:74 he cursed and acted as the world. But later he became a godly apostle who served others (Acts 5:15). After his character changed he had the opportunity to preach and to minister to thousands of people! A man filled with a demon (devil) was known for his wild behavior. Later he became a quiet disciple (Mark 5:5,15).

What is Christian Character? – Christian character would be the features, traits and nature of a Christian displaying honesty, integrity and the qualities of Jesus Christ. Christian means to be Christ-like or follow the example of Jesus. Do you know some Christians that you cannot trust? Christians need to have a good report and testimony on their jobs, schools, playgrounds, activities, church and home. It is not natural to display these Godly characteristics but we all should try to improve, change, and practice until it becomes a way of life. The Apostle John had a mean spirit, but became known as the apostle of love (Luke 9:53-54;1 John 4:7). Saul was a cruel leader who killed Christians but became a Christian who loved others (Acts 9:1,21:13). The woman of Samaria had a bad reputation, but became a good witness for Jesus (John 4:17, 18, 29). Now, what kind of character do other people see in you? Do people see you as being kind, helpful, nice, holy, or forgiving? Or do they think you are mean, hateful, wild, and disobedient? Do they see good or bad in you? The word “character” is not in the Bible, but the Bible teaches good character. A person must always try to maintain a good report and testimony. Everyone can improve and it takes character to make character. Good Christian character has many qualities as: faithfulness, humility, love, thankfulness, obedience, self-control, patience, meekness, joy, peace, temperance, faith, forgiveness, integrity. Pick one quality and work on it for several days. After you see some success, add another quality, then another. Decide right now to start developing Christian character. Learn from the Bible and grow in your life.