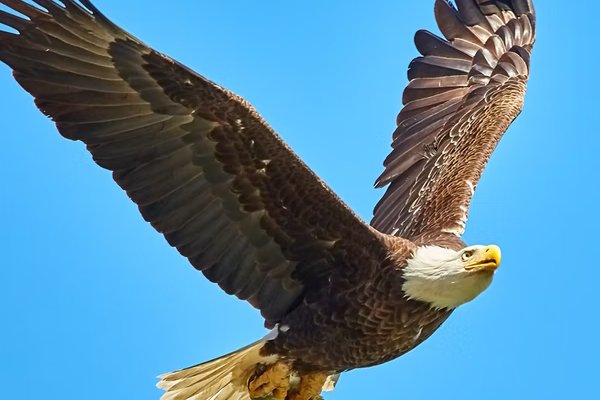 Come Soar With Me

Condensed  from my SWM book, “Bible Lessons Of The Eagle – It’s Time to Soar.” “But they that wait upon the LORD shall renew their strength; they shall mount up with wings as eagles; they shall run (soar), and not be weary; and they shall walk, and not faint” (Isaiah 40:31). The eagle sits alone on the edge of the highest cliff watching the dark clouds overhead fill the sky with darkness. He sits perfectly still, turning one eye and then the other towards the storm and the vast oncoming clouds. He sees the forked lightning flashes are becoming more frequent. He does not move, not even a feather until he knows the time is just right. Soon he feels the first great burst of the cooler oncoming breeze. It is then he knows the storm has arrived. The time is right! With a screaming shriek he leaps and swings his wings, not away, but toward the storm. He uses the oncoming storm itself to soar upward into and through the black sky. He uses the storm to soar upward higher and higher. Soon the eagle soars higher and higher above the storm until he sees the blue skies. The eagle turned the storm clouds into a soaring chariot. He is now where other birds have never flown nor gone. He now knows what others will never know. The Lord does not want us to remain in the storms of life, but He wants us to respond to His upward calling and to breathe the lofty air of the heavens. While others stay, he soars! The eagle faces the storm and then uses the storm itself to soar higher and higher unto the presence of the Omnipotent One. The eagle leaps with renewed strength to soar where others have dreamed of, but have never known. With the storm beneath and the Lord above, he experiences the power, presence, and pleasure of God Himself. Inspirational! He can now look into the face of God and screech, “This is where I belong!”

Years ago I told my wife, “It is time for us to soar.” It was and we did! Many years later, we are still soaring and using different storms to soar even higher to know the presence and pleasure of God and screech loudly, “This is where we belong.”

Is it time for you to soar? Keep one eye on the storm and the other eye on the Lord. When the touch of the cool wind finally arrives, don’t remain, but renew your strength for the flight. The storm will take you to far away places to change many lives. Take a deep breath and make that leap of faith into the oncoming storm. It is time to arise, and go over, above, and beyond your expectations. I now invite you to come “Soar with me!” Unbelievable, incomprehensible, and inconceivable! As we soar together higher and higher, we can also joyfully screech, “This is where we belong.” You will learn that one can do much, but many can do much more. So let’s soar together and make the unknown God known (Acts 17:23). There are still many heights unreached, places unknown, people unreached, lives to be changed and souls to be saved.