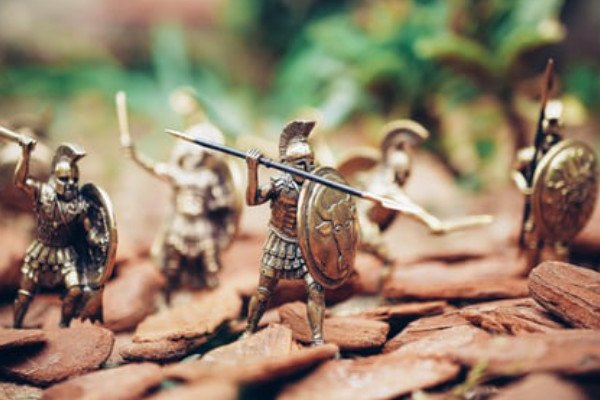 “Fight the good fight of faith…” (1 Tim.6:12). Paul also said, “I have fought a good fight…” (2 Tim.4:7). As Paul we should also fight a good fight and flee a bad fight (never fight a skunk). You can wrestle with a pig. You will both get dirty, but he will enjoy it. Sometimes you can win a battle, but lose the war. It is important to know your enemy and the cause of the fight. Consider results and regrets. Pick your fights. Lightweight boxers never fight heavyweight boxers. Know your fights. Some fight with words, and some with weapons. Some actually enjoy fights, others endure fights. Some use their hands, and some use their heads. Some use swords, and some use silence. Some seek restoration, and some seek revenge. Some have a closed mind, and a closed fist. Also there are times to be silent, times to walk away, and times to run. There are times to be silent and let the Lord fight your battle (Pr. 26:20).

There are times for fight and times for flight (I Tim. 6:11). Wisdom is knowing when. There are different ways to fight. A donkey turns away from you then kicks from behind with both feet. Bulls of Bashan circled the prey and crushed it to death (Ps. 22:12). A snake strikes from hidden places, cats scratch, dogs bite, skunks spray, wasps sting, alligators devour, and turtles snap. What is a good fight? A good fight is when you attack the problem and not the person. A good fight is to fight against the wiles of the devil (Eph. 6:11). We should fight the good fight of faith, truth, and righteousness (I Tim. 6:12).

A good fight ends with restoration not regrets. A good fight is understanding that it is not who is right, but what is right. When it is a non-scriptural fight, you should yield to authority. When it is a Scriptural fight, both should yield to Scriptures. A good fight is when both parties walk away satisfied. A good fight is when the Lord is glorified and the church is edified. So, if there is anything between you and another person, go to them and fight the good fight of restoration (Mt. 5:23-24). If there is anything between you and God seek forgiveness (I John 1:9). When you fight against God it is a bad fight because you will never win – never! Seek unity (Ps. 133:1) and not strife (Phil. 2:3). So fight a good fight. You will be glad you did, so will others, and so will the Lord.

Last Week Question: What goes up but never comes down? Answer: Age – Have a good-un – TC