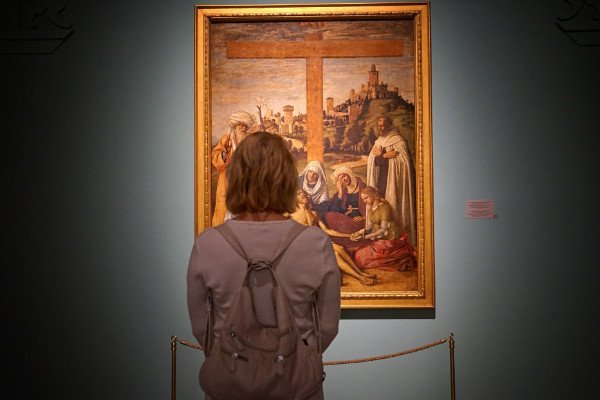 He That Hath The Son

Home » He That Hath The Son

The illustration: “A very wealthy man who was a renown art collector died. His estate and art collection was to be auctioned. Art collectors from around the world gathered to the auction. The auction began with a painting not on the art list. It was an unprofessional painting of the man’s only son who had had sacrificed his life on the battle field. The auctioneer begin the auction asking for a bid. The room was silent. “Who will open the bidding with $200?” Then he said, “Do I hear a bid of $100?” Minutes passed and no one spoke. Someone cried, “Who cares about that painting? It’s just a picture of his son. Let’s bid on the good stuff.” Many echoed in agreement. “No, we have to sell this one first,” replied the auctioneer. “Now who will take the son?” Finally the old estate caretaker said, “For many years I loved the father and I also loved his son, but I have no money to bid.” The crowd yelled, “Just give him the painting and let’s get on with the auction.” After more silence, the auctioneer said, “Do I have any bids?” The room remained silent. The auctioneer then said, “The caretaker has a desire to have the son. Can we accept his desire as a bid for the son?” Quickly all agreed it would be acceptable. Then the auctioneer said, “Going once, Going twice, Gone.” The gavel fell. The crowd then cried, “Now let’s bid on the real art treasures!” The auctioneer then announced the auction was closed and replied, “The father’s will stipulated that whoever has the son, has it all, including the art and the estate.”

This story is an illustration that whosoever has the Son of God also has all that comes with Him. It illustrates a loving Father:“For God so loved the world, that he gave his only begotten Son, that whosoever believeth in him should not perish, but have everlasting life” (John 3:16). It illustrates the Son of God who sacrificed His life on the cross for our sins. It illustrates that he that has the Son of God has it all, including eternal life. “And this is the record, that God hath given to us eternal life, and this life is in his Son. He that hath the Son hath life; and he that hath not the Son of God hath not life” (I John 5:10 -11). It illustrations two types of people: Those who “hath the Son hath (eternal) life.” Those who “Hath not the Son of God hath not (eternal) life.” This Easter, do you “hath” or do you “hath not” the Risen Son of God?” As the caretaker, “When you have the Son you have it all, including eternal life.” Christianity is not a religion, but a relationship with the Lord Jesus Christ. Only Christianity has a risen Saviour! This is the meaning of Easter.