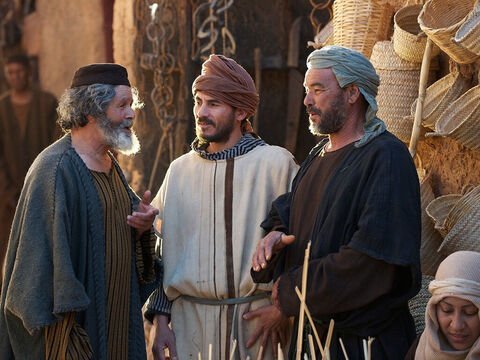 The first four books. Matthew, Mark, Luke. and John, wrote these first books. These four books are referred to as the Gospels. These four books make one complete story of the birth, life. death and resurrection of Jesus Christ. These books record the human ancestry, birth, death, resurrection, and ascension of Jesus Christ, the Son of God, and Son of Man. They also record His words. and His works. These books not only tell the story of Jesus but also show His personality. Matthew was written at he earliest date about AD 37. The letters AD before a date means in the year of the Lord. The other books were written almost thirty years later, around AD 60. These four books cover a period of about forty years, before the birth of Christ to His resurrection and ascension into Heaven. Luke also wrote the book of Acts. John also wrote I, II, and III John, and Revelation.

One Story – All four of these books make one wonderful story of Jesus. It is amazing that these four men, Matthew, Mark, Luke and John wrote individually but all four agreed together about Jesus. This is more proof that the New Testament is the Word of God. The same as the land is covered with four points of direction on the compass: north, south, east, west. These four books give four different views and all agree to give the full life of Jesus Christ.

What is an epistle? The word epistle simply means a letter. In those days the writer of the letter signed his name at the beginning of the letter (Romans 1:1; I Corinthians 1:1; II Corinthians 1:1; Galatians 1:1; etc.). After the Book of Acts ends, there begins a series of letters or epistles from the Apostle Paul to the churches. The next nine books are written by the Apostle Paul to churches that he established on his missionary journeys. These letters are all addressed to Christians or churches. That is why they are named the Christian Church Epistles.

These nine books are: Romans, I and II Corinthians, Galatians, Ephesians, Philippians, Colossians, I and II Thessalonians.

After the church letters, the Bible continues with writings to the pastors or individuals. These four epistles are I & II Timothy, Titus, and Philemon. The first two are written to Timothy, a young pastor. The third letter is written to another young preacher, Titus. The Book of Philemon is written to a Christian leader. These four books are called the pastoral Epistles.

There are nine other books in the New Testament. These are Hebrews, James, I and II Peter, I, II, and III John, Jude, and Revelation. These letters are not addressed to churches or pastors. Most of them are to the Christians or the Jews as a nation. The Book of Hebrews is written to the Hebrew (Jewish) nation. James wrote to the twelve tribes scattered into many countries. Peter wrote to the strangers (Jews) scattered throughout different countries. The books of I, II and III John are written to the Christians as a father would write to his children. The Book of Jude is written to them (Christians). The last book, Revelation, is written to God’s servants (Christians) about the things which must soon come to pass.

The Pastoral Epistles teach the qualifications of a pastor, deacon, and those in leadership in the early church.

The Hebrew Christian Epistles (9)
Hebrews James, I and II Peter, I and II and III John,
Jude and Revelation

The Book of Acts

The Acts of the Apostles – This book could also be called The Acts of the Holy Spirit. Because it explains the ministry of the Holy Spirit in the works of Christians and the early church. Acts tells what happened after the resurrection of Jesus, the history of the church and the first Christians. The name comes from actions or acts of the Apostles. Acts was written by St. Luke the same person who wrote the book of Luke. What is an apostle? Why did the name disciple change to apostle? Apostle means a person who has been sent on a mission by someone else. The disciples were called to follow and the apostles were sent. The true apostles were sent personally by the Lord on a mission of preaching the Gospel. Luke wrote twenty-eight chapters telling the action of the apostles after Jesus ascended into Heaven. The main characters in this book are Peter, the first pastor in Jerusalem, and then early in the book, Paul, the great missionary, becomes the leader. The Book of the Acts records the beginning of local churches with pastors, evangelists, missionaries, and deacons.
Most doctrines and beliefs were established in the Book of the Acts. This is one of the most important books for the church to study. The book of Acts teaches the mission of the church in the absence of Jesus Christ. “…ye shall be witnesses unto me both in Jerusalem, and in all Judaea, and in Samaria, and unto the uttermost parts of the earth” (Acts 1:8). The book of Acts explains what the Christians did after Jesus returned to Heaven. This book teaches the work of the Holy Spirit in the lives of Christians as they carry the Gospel, beginning in Jerusalem and then reaching into the world. (…continue next page)