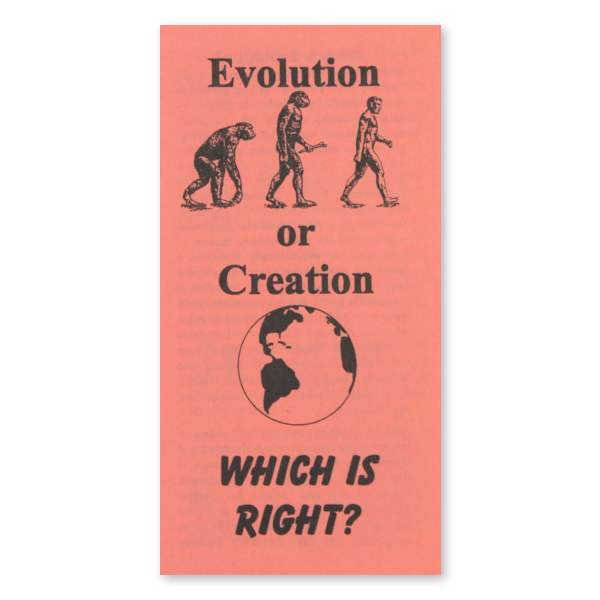 What is Evolution?
The word evolution comes from the word “evolve.” The dictionary defines evolve: to develop gradually (slowly); to unfold; by natural process; to open out. Evolution means gradual unfolding or developing; growth; the scientific theory according to which the higher forms of life have gradually developed from simple and rudimentary forms. Rudiment means beginning; germ; imperfectly developed; or formed organs. An evolutionist is a person who accepts the evolutionary theory of evolution. The evolutionary theory is a belief that man evolved from a simple and beginning form of lower life. Evolution is a scientific theory that man possibly could have evolved from a lower animal form (as an ape or monkey). Evolution still remains an unproven theory. Time periods are never stated exactly but evolutionists use words as: possibly, perhaps, about, it could have been, maybe, it is thought and approximately.

After hundreds of years, the basic source of evolution still remains only in the mind and theories of man to explain the existence of life without a Creator. An evolutionist denies creation and rejects the Creator. Evolution presents the first man as a cave man. Well, men have always lived in caves even until this day.

Evolution presents dinosaurs and large animals that no longer exist. The Bible states the existence of several large animals which became extinct. “Dinosaur” is a modern-day name given by Evolutionists, but it is not the Bible name given by Adam. By the way, Noah did not need to put full grown animals on the ark. Also evolutionists continue to look for the missing link, and it is still missing.

What is Creation?
Creation is from the word “create.” The dictionary defines create: to bring into existence out of nothing; to originate; to make. The word “make” means to form things from things, but create means to make things from nothing. Only God can create; man can only make things from existing things. Creation was the act of bringing the world into existence.

Creator means the One (God) Who created all things. “For by him were all things created, that are in heaven, and that are in earth… all things were created by him, and for him…and by him all things consist” (Colossians 1:16-17). To believe in creation you must also believe in a Creator. Without God there would be no beginning. The Bible is the only book that defines creation. The Bible simply states, “God created.” A creationist denies evolution.

Evolution vs Creation
Since evolution is “a theory” that states what could have or might have happened, we do not have any proven evidence to print concerning evolution, but we do have the Bible to prove creation and disprove evolution. What does the Bible say?

Did Heaven and Earth Evolve? Bible: “In the beginning God created (made from nothing) the heaven and the earth” (Genesis 1:1).

Did Day and Night Evolve? Bible: “And God saw the light, that it was good: and God divided the light from the darkness. And God called the light Day, and the darkness he called Night. And the evening and the morning were the first day” (Genesis 1:4-5).

Did Land and Waters Evolve? Bible: “And God called the dry land Earth; and the gathering together of the waters called he Seas: and God saw that it was good” (Genesis 1:10).

Did Grass, Trees, and Plant Life Evolve? Bible: “And God said, Let the earth bring forth grass… and the fruit tree yielding fruit…and God saw that it was good” (Genesis 1:10-11).

Did Man and Woman Evolve?
Bible: “So God created man in his own image, in the image of God created he him; male and female created he them” (Genesis 1:27).

God created all life. Without God there would be no life. God created you with a living soul that will never die (Genesis 2:7). God created Heaven and Hell. God created a way for you to go to Heaven (John 14:6; John 3:16). You have the right to choose evolution (no God) or creation (God). Choose creation and God!

Which Will You Choose?