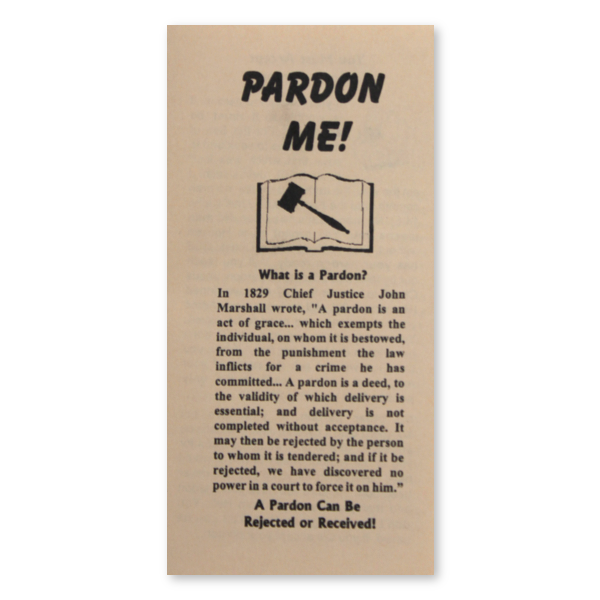 What is a Pardon?

In 1829 Chief Justice John Marshall wrote, “A pardon is an act of grace… which exempts the individual, on whom it is bestowed, from the punishment the law inflicts for a crime he has committed… A pardon is a deed, to the validity of which delivery is essential; and delivery is not completed without acceptance. It may then be rejected by the person to whom it is tendered; and if it be rejected, we have discovered no power in a court to force it on him.”

A Pardon Can Be
Rejected or Received!

A Legal Pardon – A pardon is the forgiveness of a crime and the cancellation of the relevant penalty; it is usually granted by a head of state (such as a governor, monarch or president) or by acts of a parliament or a religious authority. President George W. Bush handed out 189 pardons during his two terms. Also, it is a tradition that each year a Thanksgiving turkey will receive a presidential pardon – Wikipedia.

Who Is Guilty?
Who is guilty with God? All are born guilty and in sin. “For all have sinned, and come short of the glory of God” (Romans 3:23). All means all — the rich and poor, young and old, all have sinned. “There is none righteous, no, not one” (Romans 3:10). “No one” means you and me. Not one person is born righteous. All have sinned and all need to be pardoned. A pardon is only for people who know they are guilty. A pardon is not for innocent people. A president can pardon some from prison, but only God can pardon a person from sin. The problem is most people think they are innocent and do not need a pardon.

Illustration: A king went into a prison and asked, “Who here is guilty?” All the prisoners said, “I am innocent. I am not guilty.” The king cried, “Is there anyone here who is guilty?” Finally, one man said, “I am guilty. I have sinned, I am sorry for my crime.” The king said, “Well, I finally have someone to pardon, because I cannot pardon innocent people. Sir, you are pardoned and free from your crime.”

What Is A Pardon?
A pardon is an act reversing a sentence given under a guilty verdict. A pardon can only be given by one with power and authority to give it. Presidents have the power to pardon criminals in America. Governors have the power to pardon criminals within their state; but only God has the power to pardon sin. “Thou art a God ready to pardon, gracious and merciful, slow to anger, and of great kindness” (Nehemiah 9:17). “Let the wicked forsake his way… and let him return unto the LORD, and he will have mercy upon him… for he will abundantly pardon” (Isaiah 55:7). All are born sinners and all need to be saved and pardoned.

Illustration: A governor was to give a pardon on a special day. Each prisoner waited, hoping his name would be called. Finally, a name was called. “Reuben Johnson, come forth. You are now pardoned.” As the prisoners sadly returned to their cells, Reuben Johnson also got in line to return to his cell. The governor said, “Reuben, you don’t need to go back to prison. You are now free.” With tears rolling down his cheeks, Reuben Johnson said, “I don’t have to go back to my cell. I am free.”

How To Be Free
God has your name on a pardon from Hell. You don’t have to go to Hell. You can receive or refuse the pardon. If you refuse, you will continue in your sin. All you need to do to be lost or unsaved is just do nothing. Some of the saddest words in the Bible are “and ye would not!” (Luke 13:34), and “I never knew you: depart from me” (Matthew 7:23). It would be better for you if you had never been born than to die without Christ (Matthew 26:24). People in Hell would give anything to have one more opportunity to be saved. When you die, it is too late. You must accept the pardon, or it is worthless.

The Pardon Must Be Received – In 1829, a convicted criminal, George Wilson, was sentenced to die. President Andrew Jackson offered him a pardon to be free. He refused to accept it. It was the first time a pardon was refused. The courts decided the pardon was worthless unless accepted. A pardon must be received to be honored, but a person also has the right to reject his pardon. The Supreme Court declared that a pardon cannot forced, but must be freely received. George Wilson rejected his pardon and died for his crime.

“ But as many as received him, to them gave he power to become the sons of God,
even to them that believe on his name.”
– John 1:12

You Must Accept God’s Pardon

If you refuse the pardon, it is worthless. It must be accepted. “For the Son of man is come to seek and to save that which was lost” (Luke 9:10). “Jesus saith…I am the way, the truth, and the life: no man cometh unto the Father, but by me” (John 14:6). No man means no person. No man means you. You cannot go to Heaven without your pardon, Jesus Christ. God has your pardon ready. Will you reach out by faith and accept His pardon, Jesus Christ, to be your Savior? All have sinned (Romans 3:23). All includes you. Admit you are a sinner and need to be saved. You can be pardoned and say, “I don’t have to go to Hell. I am free.” When you die, God will not ask the name of your religion or church. Jesus is the only pardon from your sins and Hell.

No other pardon. If you have not accepted God’s pardon, Jesus Christ, you are still in your sins. It would be awful for you to die without Jesus Christ. It would have been better for you if you had never been born. Be sure you have your pardon and that you are saved from Hell. You don’t have to go to Hell. You can be saved, if you will accept your pardon.

You can now reach out to God by faith and receive Jesus Christ as your pardon from Hell. Be saved today. Don’t refuse, but receive your free pardon!

Yes, I want to be pardoned from Hell.

I want to be saved and and go to Heaven.
Pray: “Dear God, I know I have sinned. I believe Jesus Christ died on the cross to forgive my sin. I believe He rose from the grave and is alive in Heaven to save me and to give me eternal life. I now repent (turn from my sin) and accept Christ as my Lord and Savior. I am now saved!”–Amen!