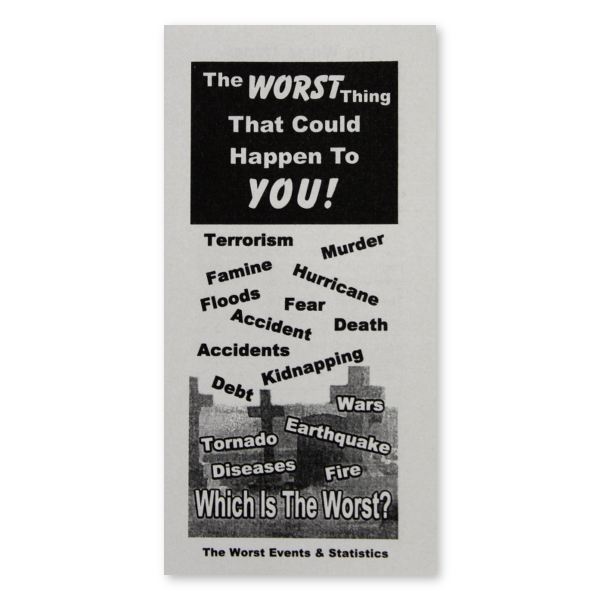 The Worst Thing That Could Happen to You

The Worst Thing That Could Happen to You

What is the worst thing that could happen to you? There are many different ways to suffer pain and heartaches. Today a person could be happy and everything be fine, but tomorrow a great tragedy could happen. There have been many terrible fires, accidents, earthquakes, tornadoes, hurricanes and floods. It is always a great sorrow when the doctor says he must operate because of cancer. Sudden news of death is always a tragedy. Today, something tragic could happen to you. But what is the worst thing that could happen?

The Titanic – April 10, 1912 – The “unsinkable” Titanic left on its first voyage. On April 14, the ship hit an iceberg, and two and one-half hours later, the great ship sank. Over 1,500 people died in a watery grave. The sinking of the Titanic was terrible. But it was not the worst thing to happen.

Atom Bombs – August 6, 1945 – The atom bomb, “Little Boy,” was dropped on Hiroshima, Japan. Over 92,000 people were killed or missing. It was a terrible thing! August 9, 1945 – A second bomb, “Fat Man,” was dropped on Nagasaki, Japan. Over 40,000 people were killed.
Many were deformed and injured. Many thousands killed themselves because of pain. But atomic bombs are not the worst thing to happen.

Storms – Over 200 tornadoes hit America every year. Winds may reach 300 mph. In just minutes, a tornado comes and goes, leaving death and destruction.

Earthquakes – Most destruction and deaths from an earthquake can happen in just a few seconds.

In 1894 the Bubonic Plague appeared in Hong Kong, a seaport city. Ships carried the disease to the world. More than 10,000,000 people died during the next 20 years. Cancer is also a frightening disease. But diseases are not the worst thing to happen.

Terrorism – September 11, 2001 – Terrorists for the first time attacked America. Over 3,000 people died as planes crashed into the World Trade Center in New York and the Pentagon in Washington. Many people fear terrorism, but terrorism is not the worst thing to happen.

It will even be worse during the future time of the Great Tribulation on this earth. “For then shall be great tribulation, such as was not since the beginning of the world to this time, no, nor ever shall be” (Matthew 24:21). All people are facing an inescapable judgment of God. Great tragedies can quickly happen and soon pass. Disease and sickness can destroy the body. Death is not the worst thing to happen to you. The worst thing is to die without Christ as your Savior and to be forever — eternally — separated from God. At death, all opportunities are ended. According to the Bible you will still live forever in Heaven or Hell. Your body may die, but not your soul. You will live eternally “with the Lord” or “without the Lord.”

Jesus said, “I am the way, the truth, and the life: no man (that means you) cometh unto the Father (God) but by me” (John 14:6). Jesus Christ is the way to eternal life. Do not die without Jesus. The worst thing that could happen would be for you to die without the Lord Jesus Christ. No one knows when he will die. You could die tomorrow. Be saved today. Do not die without Christ.

Be Saved Now! Jesus Christ died for you. He arose from the grave to forgive your sins and to save you. He will now save you now if you will pray and ask Him. Hell is forever, and it is the worst thing that could happen to you. Many people in the past had the same opportunity you now have. They refused. Their door of opportunity is now closed. Do not die without Jesus as your Savior.

Pray: “Dear God, I know I am a sinner. I believe Christ died for me and arose to save me.  I now repent of my sins and trust Jesus Christ as my Saviour. According to the Bible I am now saved and “in Christ.”

You should seek a Bible believing church and study the Bible to grow spiritually (I Pet.2:2).