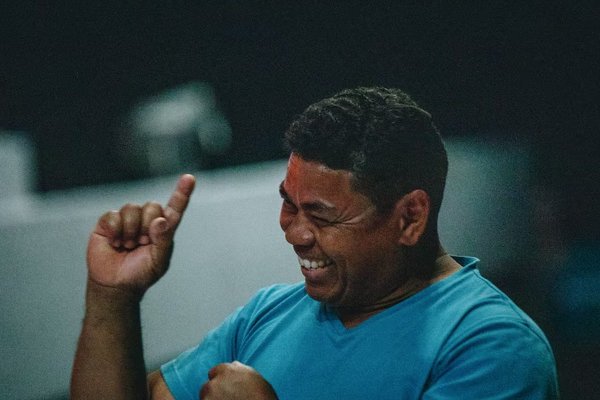 By David BennettOctober 2, 2021No Comments

Deaf people in Africa need Jesus Christ. Who will tell them about the way of salvation through Christ? I thank God that He has allowed me to serve around the world, including in Liberia, West Africa. I have visited Liberia many times since 2014. Before 2021, 12-15 Deaf people were saved on my trips. On July 5, 2017, six Deaf men were saved in one day! That was a miracle. Anytime even one Deaf man is saved, it is a miracle from Heaven. I was praising God for a long time. Five of those Deaf men are still serving God today on earth, but Andrew Kollie is now praising God in Heaven. Andrew died on Sept. 6, 2019, just two years ago. The other Deaf in Liberia and I miss him very much.

Andrew learned very quickly. He followed me everywhere and asked many questions about the Bible. He was very concerned about the souls of other Deaf people. He witnessed to them about Christ. He preached the Gospel to them. I trained Andrew and let him help preach. I also used him in illustrations. Andrew was on fire for God!

Several times, Andrew and I went to the capital city, Monrovia. He gathered a bunch of Deaf people, and we preached to them. We saw eight or nine other Deaf people come to know Christ during that time. After I left Liberia, Andrew continued to travel to other places and witness about Christ to the Deaf. He sent me pictures of Deaf people that were saved.

After Andrew died, I began to think about having an evangelistic crusade to the Deaf in Monrovia. The time was right. Only a few had been saved, and we wanted to see more saved. We also want to see a new deaf ministry started in Monrovia for these Deaf people. In March 2021, Pastor Mark Coleman from Chicago and I went to Liberia. We planned a four-day evangelistic crusade. Three Deaf men from Ganta City named TZ, Alfred, and Wologbah worked with us. I praise God for these three Deaf men who invited many Deaf to the crusade and led them to Christ after Mark and I preached. God saved 13 Deaf people during that crusade! Ten were men and three were women. The Gospel seed was planted and watered in the lives of other Deaf people.

SWMI is making plans to start a new deaf ministry in Monrovia in the near future. We have four missionaries now on deputation for the field of Liberia. They are Bruce and Amanda Stuart, Monique Lindsey, and Carrie Whaley. They need your prayers and financial support also. We are very excited about future ministry in Monrovia and around Liberia. Thank you for your prayers and faithful support for this ministry. You will enjoy eternal rewards in Heaven for your investment in the souls that have been saved and in the lives of others that we will reach for Christ in years to come.