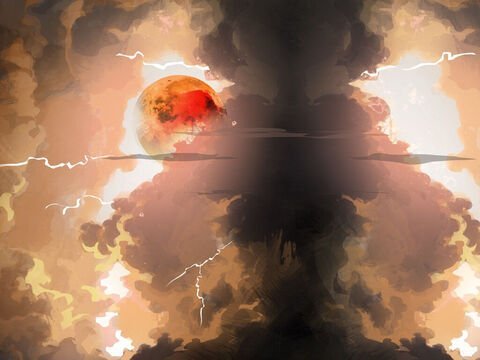 “But I would not have you to be ignorant, brethren, concerning them which are asleep, that ye sorrow not, even as others which have no hope. For if we believe that Jesus died and rose again, even so them also which sleep in Jesus will God bring with him. For this we say unto you by the word of the Lord, that we which are alive and remain unto the coming of the Lord shall not prevent them which are asleep. For the Lord himself shall descend from heaven with a shout, with the voice of the archangel, and with the trump of God: and the dead in Christ shall rise first: Then we which are alive and remain shall be caught up together with them in the clouds, to meet the Lord in the air: and so shall we ever be with the Lord. Wherefore comfort one another with these words.” –1 Thessalonians 4:13-16

The next great event from Heaven is “Homecoming,” “Reunion,” “Home at last,” or the “Rapture.” Some words not found in the Bible are rapture, Bible, grandfather, Trinity, and Demons. The word rapture means “Hop to Heaven,” or caught up or transport from one place to another. Jesus Christ is coming for His church, believers, saved “In Christ.” He is calling His ambassadors home before war begins. For many years some have looked for Signs of His Coming because of double yoked eggs, the nation of Israel in 1948, red heifer, line up of the planets, Heaven’s Gate, and personal prophecies from many.

False Prophets – People have prophesied that many people of the past was the Antichrist. Some thought Jim Jones or even David Koresh was Jesus Christ. What does the Bible teach? Do not look for the Signs but look for the Son.

Illustration: If you swing a magnet over match sticks and nails, only the nails will raise up to the magnet. It will be the same when Jesus comes, only the Christians will rise to meet Him in the air.

What Does The Bible Teach?

This is the first time that Paul explains what will happen to saved people who died in the Lord and the saved who are alive when Jesus comes.

“But I would not have you to be ignorant brethren – Ignorant does not mean stupid but it means without knowledge or it had not been revealed at this time. Paul gives hope and for the first time reveals the coming of the Lord. Knowledge erases ignorance. Now all people can have knowledge of the rapture and not be ignorant.” – I Thessalonians 4:13-18

Concerning them asleep – Loved ones who died in the Lord. There is hope. It is a sad time to walk away from the cemetery, put flowers on the grave or stand there with memories. As you walk away from the grave you can remember that one day we will all be together. This is the hope that we have in God. He is not dead but just asleep and one day
he will be awakened unto life eternal.

Illustration: On December 7, 1941 the Japanese army bombed many ships in Pearl Harbor. One American battleship, the Arizona went down to a watery grave. Hundreds of sailors were trapped inside and could not get out. Some frogmen went under water and tapped in Morse code to those inside the ship. Some answered and asked, “Is there any
hope?” Some of the sailors were freed, but hundreds died inside the ship. Those who have died in the Lord could tap out a message from inside the grave, “Is there any hope?” Jesus Christ Himself one day will free them from the grave. This is our blessed hope.

Sorrow not as others which have no hope – It is all right to sorrow, but Christians should not sorrow as the world which has no hope. Why? Because Christians have hope of a reunion, a future time to be together. Unsaved people sorrow without hope. Think of those loved ones in the graves. There is hope that one day Christians will be together – forever!

If we believe – The word we means Christians. Believe means those “in Christ” who have believed. We means all “in Christ.”

For the Lord Himself shall descend from heaven – The Lord will come “Himself.” The Lord will not send a substitute. In the past He sent Moses, prophets, and Angels, but He will come this time.

Illustration: During World War II American troops had to leave the Philippine Islands before the Japanese armies arrived. As General Douglas MacArthur left, he promised the people, “I shall return.” It was hard for the people to live under the control of the Japanese armies, but they had hope in the promise of MacArthur. They expected him to
return. Finally one day American airplanes flew over the island. Then came the American army. The Japanese armies were beaten, and General MacArthur stood before the excited people and said, “I have returned.” There is a statue to honor General MacArthur in the Philippines. One who is greater than General Douglas MacArthur has promised to return for His people. The Lord will keep His promise.

With a shout – The same as yell! In Revelation 4: 1 the Lord “Himself” will shout, “Come up hither.” Shout means an exciting and alarming sound. This will be the first voice that many deaf people will hear. One day the Lord will return – It could be today!

Voice of Archangel – The Lord “Himself,” not an archangel, but the voice as an archangel will be heard. Jesus will not send Moses, or Elijah or an angel, but He will personally return for His people.

Trump of God – The Lord “Himself” (not Gabriel). His voice will be as the sound of a trumpet. The trumpet was used for four major events in Bible days. The trumpet could easily be heard by all people.