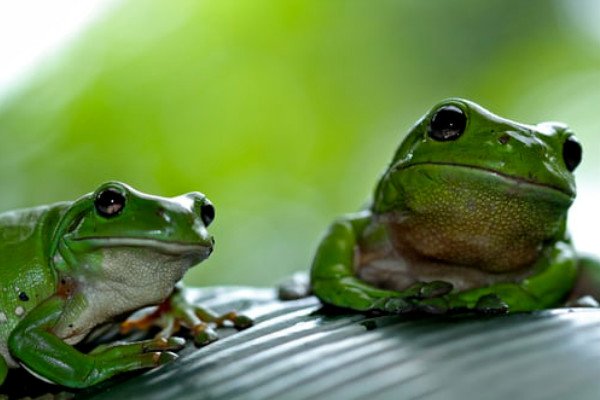 The Fable of a Frog

When I was a young boy, I remember times I would churn milk to make buttermilk and butter. As the milk was churned (up & down), it produced buttermilk. The butter would then be separated from the milk. We would have both butter for our biscuits, and milk for our cornbread. Sometimes when the cow ate some wild onions it made the milk and butter taste like onions. My smart mom told us to eat some wild onions and we would not taste the onions in the milk and butter. It worked! Well, there is a fable of a milk churn and two hopping frogs. The frogs left the pond and kept hopping, hopping, and hopping until they hopped onto the porch. They both made a big hop and hopped onto the lid of a churn of milk. Then they fell into it. They swam and swam for hours, but could not get out of the churn. Finally, one frog said, “I give up. I I cannot kick any more. I give up.” He slowly went to the bottom and died. Well, the other frog would not give up. He just kept kicking, kicking, and kicking. He kicked all the night with all his might. He would not quit! In the morning the wife was surprised as she looked into the churn and saw one dead frog sinking and another frog sitting on a pound of churned butter.

Learn: “Look before you leap.” Watch where you walk!

Learn: Maybe the kicking frog was Deaf and never heard the complaining quitter!

Learn: Both frogs had a choice – to sink or swim. You have a choice only you can make.

Decisions determine directions – Directions determine destinations. The Devil cannot make you sin, and God will not make you serve. Decide to overcome your obstacles. Keep kicking, and kicking until you overcome. A failure is not someone who fails, but someone who quits. Success is not determined by what starts you, but what stops you. You cannot change the past, but you can change the future. You may not be able to change what happened, but you can change the ending. Which frog represents your present life? Many have quit. But look around you, and you will see many who were once as you are now, but they did not quit. If they did it, so can you. Don’t sink, but swim. Keep kicking, and kicking and you will reap if you faint not (Gal. 6:9). Let’s learn a lesson from a frog!

Remember: “None of us am purfect” – TC