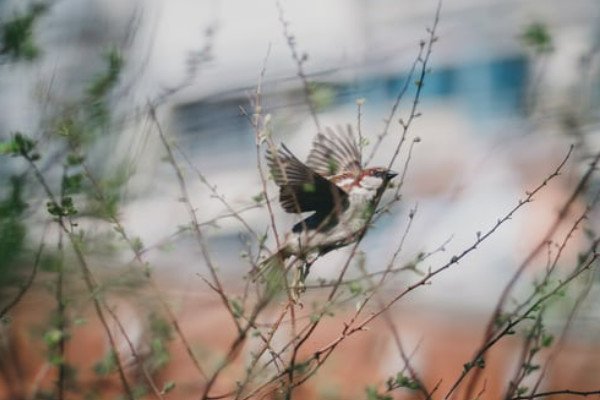 The Lord used sparrows to compare His love for you. “Are not two sparrows sold for a farthing? and one of them shall not fall on the ground without your Father” (Matt.10:29). “Are not five sparrows sold for two farthings, and not one of them is forgotten before God? But even the very hairs of your head are all numbered” (Luke 12:6-7). “Fear ye not therefore, ye are of more value than many sparrows” (Matt. 10:31). Jewish people did not want images on coins (Luke 24:20-21). They only used the sacred Jewish half shekel (one-half ounce) for payments or offerings in the temple. The Jews never went to worship empty handed. Since worshipers came from all over the world, money changers exchanged foreign money into Jewish half shekels.

The Jews exchanged their foreign (Gentile) coins for Jewish coins that had to be used in temple worship. Money changers overcharged so Jesus drove out the temple (Matt. 21:12). Sparrows were plentiful, cheap, and on sale. One farthing (one-fourth cent) bought two sparrows and two farthings bought five sparrows. Buy four sparrows and get the fifth one free. The fifth sparrow became worthless without value. Sometimes do you feel like that fifth sparrow? Do you feel worthless, without value?

Look up and cheer up because you are much more valuable than birds. “Fear ye not therefore, ye are of more value than many sparrows” (Matt. 10:31). “If ye then, being evil, know how to give good gifts unto your children, how much more shall your Father which is in heaven give good things to them that ask him? (Matt. 7:11). The total number of wild birds in the world is estimated between 100 billion and 400 billion with over 10,000 known species of birds. The estimate number of birds in the United States is about 10 billion in the spring but about 15 billion in the fall after the babies have hatched.” – arbotopia.com.

Naturally, only God knows the exact number of birds as He also knows the exact number of stars and even the hairs on your head. Wow! The Lord cares and provides for these billions and billions of birds each day – even the one that falls is noticed. Now, consider that you mean much more to the Lord than the birds. Also if the Lord daily cares for these billions of birds be assured He daily cares much more for you (1 Peter 5:7). You are not a fifth sparrow but you are His child and your Heavenly Father cares much more for you (Matt. 7:11). So when you feel unloved and see a bird, point to the bird say out loud, “God loves you but He loves me much more.”